Home/Blog/Charity Abseil in Sheffield
Previous Next

Just got back from a fine weekend running a charity abseil in Sheffield with some awesome rock climbing on the Saturday too.

We started the journey north on Saturday morning early and got side tracked by the Decathlon store by the motorway in Birmingham. For those new to the outdoor game or like my friend and climbing partner Jonnie who had not been into the wonderful world of Decathlon, it’s a bit of a ‘kid in a sweet shop’ scenario. Lots of great kit at really cheap prices and top quality too – there you go Decathlon, that’s my plug for you.

So after lightning our wallets we carried on to High Tor a limestone crag in the peaks and one of the best bits of limestone around. I wanted to climbing a few routes and get the arms working again after a little time off but what happened was very different. It was freezing with a strong northerly blowing and after the warm up on “Original Route” HVS 5a, my fingers, toes had nearly fallen off and it turned out that there was some good games of rugby going on that day. So what did we do……yes, we went to the pub and watch the last bit of the Irish game and all of the English game. Some cracking rugby was viewed.

The next day we were up at just gone 5 am to get across to Sheffield and over to the Owen building of the Sheffield university to help Challenge Events run a charity abseil fundraising event for a Childrens charity.  The morning was cold and very over cast the rigging for this particular job was quite complex with plenty of kit was needed on the roof. I was excited though as i had made a new edge protection system to help prolong the life of the ropes and the protect the buildings that i use for charity abseils. Pictured below. It worked perfectly and allowed the ropes to run smoothly over a 90 degree edge with no damage to either the building or the ropes – awesome. 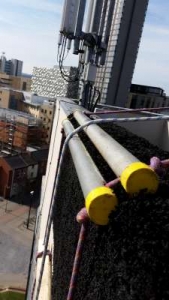 So in the end we had 54 people abseil for the charity abseil event that day and the weather got better and hotter. Ther was a great vibe to this charity abseil and everyone really put the effort and kept the energy levels up. Well done to everyone that took part.

If your interested in running a charity abseil or abseil event then get in touch for an information pack and contact us for ideas, help and advise.

If your interested in running a charity abseil or abseil event then get in touch for an information pack and contact us for ideas, help and advise.